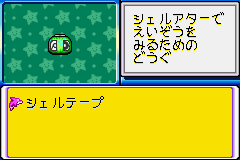 Viewing a Shell Tape on the Items screen

In Densetsu no Starfy 2, there are four green Shell Tapes and one pink tape in Densetsu no Starfy 2, found in Ogura Castle (Stage 11-1). Moe finds that one of the tapes have been dropped in the first room. He places it in Shelleter. Starfy must collect the three other Shell Tapes, found past three doors to view them in the Shelleter. The rooms have a vehicle/ability in them, which in order from right to left are Sukebon, Ryun and Kigurumi. After Starfy gives the three other Shell Tapes to Moe, he finds a pink one.

The first tape shows three green creatures falling down while flying in a loop. The second tape (or possibly tapes two-four as three are put into the Shelleter) show(s) Ogura releasing electricity from his head to create his castle. The third (pink) or fifth Shell Tape shows a crab, a penguin, a fish (likely Savako) and another character relaxing on a beach. Moe was reluctant to play the pink Shell Tape so Starfy plays it. The content of the Shell Tape embarrasses Moe and makes him blush. Angrily, he runs off with the Shelleter through the door to the right, running past Starfy and making him dizzy.

In Densetsu no Starfy 3, one Shell Tape falls from the sky in Old Castle (Stage 10-1), so Starfy, Starly and Moe watch it on the Shelleter. It shows Papa Star and Mama Star on the screen who say that they sent it. They tell Starfy, Starly and Moe that a special item is required to open the large door to Old Castle. Starly suggests a key may open the door (although it actually doesn't open the doors). After the doors are opened by the similar sounding Kaki, another Shell Tape falls from the sky so Starly puts it in the Shelleter. After another message from Papa Star and Mama Star, the Strange Hat accessory falls from the sky.