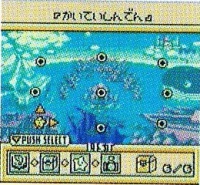 Appears to be an early screenshot of the Stage Select screen from Densetsu no Starfy. Note that the Extra! option is missing from the List.
Scanned from the Game Boy Encyclopedia, 2001 edition

For a list of prerelease information in The Legendary Starfy series, see this article.

Something similar to prerelease information is unused content. Unused content refers to things found in a game's code that are not used in normal gameplay. Examples may include unused images and models, music, text (usually development or gameplay related) or unused game mechanics. These give insight about the development of the game even if some of the content was not intended to be added to the final game from an earlier date. Densetsu no Starfy 4 and the Japanese version of Super Princess Peach have unused assets that suggest more than one game may have been in development at the same time. Developer notes and build dates are common unused content.

There are a number of different forms of prerelease information.

Conceptual information is information originating before the direction of the game is finalized. It may be found in interviews, or even in the form of unused content in the final game, although in that case it is difficult to verify the date from which the information came from.

In a 2009 conference call set up by Nintendo between Nintendo Life and six developers of The Legendary Starfy, Hitoshi Yamagami suggests that the direction on the game that was finalized as Densetsu no Starfy began as a considerably different project, where Hitoshi Yamagami and Yasuhiro Minamimoto worked on the idea of a "floating character being pushed through [a] maze". Yamagami notes that after six months in the game's development, plans were changed so that players could take control of the floating character instead of pushing it around.

Information from a workable game

This is information that originated from an early build of the game that is playable to an extent. It is sometimes referred to as 'beta' information, although 'beta' is a misnomer because the game may not be feature complete, as seems to be the case with the Densetsu no Starfy for the Game Boy Color, which did not feature the Extra! option from the List at some point in development. Prototype information may be a more accurate term. [1]

Inner workings of the game

Through hacking, decompilation, disassembly or trial and error, the inner workings of the game's code can be analyzed and things that were not intended to be found can be seen. This can reveal things such as bugs and glitches that the developers did not rectify, the game's internal name by checking the ROM's header and in cases where it is possible to decompile the game, internal filenames.

Internally, The Legendary Starfy is known as "STAFY5". One example of a glitch in The Legendary Starfy series is the demo glitch from Densetsu no Starfy. The developers did not account for Starfy losing another heart while being caught by the Imadame with no hearts left, causing an underflow glitch and revealing a flaw in the programming.