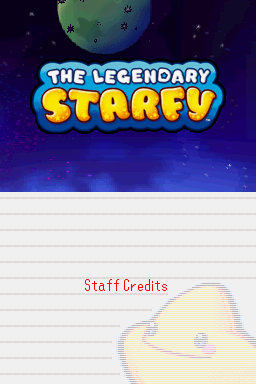 The Staff Credits screen from The Legendary Starfy

For the tune, see Credits (music).

The Staff Credits (Japanese: スタッフクレジット), also known as Staff Rolls (Japanese: スタッフロール) or simply Credits, are the credits that list the people involved in the development of the games in The Legendary Starfy series.

The Staff Roll 1 in Densetsu no Starfy 4 shows runner up designs from the Wanted Kisekae contest, while the Staff Roll 2 shows some concept art from the game.

The Legendary Starfy features only one 'Staff Roll' and the only way to see it is to beat Mega Mashtooth every time, however, there is a Story cartoon shown after the credits called The Missing Chapter, which is unlocked after beating the game after obtaining every Treasure.

In Densetsu no Starfy 3, holding the Start+Select buttons before viewing the Staff Roll 1 will pause it at its initial scene with the music still playing. This can also be done with Staff Roll 2, but with the player able to pause scenes part way through. If staff text is showing, the text will temporarily be hidden.