This page is a collection of unused content within The Legendary Starfy.

Here is some development text from the North American version:

A large amount of text leftover from Densetsu no Starfy 4 can be found in the ROM that seems to end at the last sentence of the "Stage All Clear" message displayed after beating Degil for the first time. This particular 'chunk' of text begins at 0161CFC5 (0161C1C5 in the Japanese version) and finishes at 01630A23 (Japanese version: 01631823) but there is an early group of text that covers things like messages relating to the Answers Cards riddles.

Internally there is a test Stage referred to as "Stage ". This Stage includes many curious maps which appear to have been intentionally added into the game but have graphical and/or layout errors. Among the maps are the ones used for ability demonstrations, which can be explored beyond the small screen in the demonstrations.

Similar but different test areas are found in Super Princess Peach and Densetsu no Starfy 4 (the latter in which a few have backgrounds used for Spring of Love courses).

There are various examples of placeholder text in lists found in the ROM.

There is some Mermaid Gossip text that is seemingly unused. The text is as follows:

Beginning at offset 0x170546E and ending at offset 0x1705ECA there is unused text in the Japanese version of The Legendary Starfy from Moe. The text talks about some kind of event that may have been from a trial demo. Moe says that 'his' first two games (Densetsu no Starfy and Densetsu no Starfy 2) have sold over 400,000 copies and he complains about the story of The Legendary Starfy. He tells the player to talk to everyone they find for hints.

Most of the text references Helpful Stuff (Japanese: おたすけグッズ, Helpful Goods); something that is supposedly the equivalent of Vehicles from previous games in The Legendary Starfy series. Their name implies that they are a special kind of Stuff. They would apparently be used in boss battles in cooperative play. The Helpful Stuff would account for several elements including fire, ice and poison and depending on the boss and element, the player could be in an advantage or disadvantage.

Sprites for three unused transformations, including a cockroach, a frog and a mermaid were ripped from the game [1]. It is unknown whether they were meant to be related to Bunston or not.

If the index number of the current transformation is extended past all the used transformations, the game may simply freeze; however a few invalid ones seem to use existing transformation music if the freeze is avoided by loading the invalid transformation as Starly[clarification needed] (for unknown reasons this avoids the freeze but may be coincidental), however the unused sprites still do not load.

There are unused sprites depicting Starfy wearing a brown cockroach costume. It appears that Starfy was going to be able to fly and attack using its antennas. Unlike the Frog and the Mermaid, there is no Special in the final game depicting a cockroach. 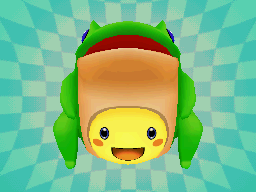 There are unused sprites depicting Starfy and Starly wearing a frog costume. It appears that the player was going to be able to attack using the frog's blue tongue. There are sprites of Starfy wearing this costume that are similar to Starfy using the Turbo Swim ability. They are omitted from Starly's sprites, presumably because she cannot use this ability. Sprites suggest that the frog was also going to have a charge attack. There are sprites of Starfy and Starly sleeping and spinning around in a green ball, as if they were Dizzy. 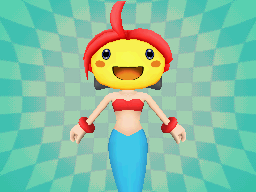 Starfy wearing the Mermaid Special that appears in the final game

In the final game, there is a Special called Mermaid (Japanese: マーメイドさん), which depicts Starfy and Starly wearing a mermaid costume similar to the unused sprites of the mermaid.

The unused yellow object with both of its faces

There is an unused object in the game that depicts a tall yellow creature with long arms with a cream colored belly and mouth. It has two possible faces. Each face has pink cheeks. One of the faces is square-shaped and depicts the creature with its mouth open and its eyebrows raised. The second face is similar to an elongated semi-circle. It appears to have its eyebrows pointing down diagonally. The reason why this object exists is unknown.

In the game, there are sprites of Starly wearing all of Bunston's transfomations and all of the unused transformations (apart from Cockroach). These are normally impossible to see, because Starly is only playable in Pufftop and in certain rooms where Team Play is available, which have no parts where Starly can transform.

If Starly is forced as the player character outside of Pufftop, she can undergo a transformation but curiously the game changes the player's sprite to the Starfy version of that transformation, and introduces additional sprite and movement related glitches.

(In fact it seems Starly can be the player character on her own in any Stage, but the developers didn't add the ability to do that for unknown reasons.)

At least some of the stage backgrounds from Densetsu no Starfy 4 appear in The Legendary Starfy such as Lobber's Villa and Tear Lake, but they are unused. These backgrounds sometimes appear in invalid rooms. 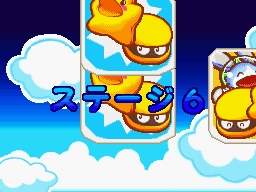 At least some of the Japanese text from Densetsu no Stafy Taiketsu! Daīru Kaizokudan appears unused in the English version. When forcing Stage name #31 on The Big Map, 'ステージ6' comes up. This text originates from the wooden board associated with Skydye Heights (Japanese: にじの海)