Kigurumi (Japanese: きぐるみ, Kigurumi) is an ability in the first four Starfy games. It is somewhat similar to Roostar. When using it, Starfy or Starly wear an animal costume. The Legendary Starfy is the only game which lacks this ability if Roostar doesn't count. 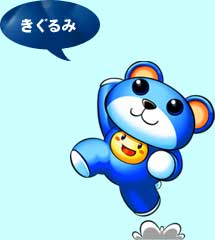 The Kigurumi as it appears in Densetsu no Starfy.

In Densetsu no Starfy, the Kigurumi is a blue teddy bear. Use the control pad to move left or right. Press the B button to scare enemies. Press the A button to jump.

The player can press Select to switch between the koala and the crocodile.

In Densetsu no Starfy 3, it's a grayish sheep. Starfy had to give Fukafuka three materials in order to make it — Wool, the Sewing Set and the Curved Horns. This one can be sped up by holding the B button. The upgrade is a pink pig.

In Densetsu no Starfy 4, it's a black pig and an octopus. The player can change forms by pressing the L or R buttons. This time they can shoot food at enemies by pressing the Y button. Holding the B button allows the player to go faster.