From Starfy Wiki
(Redirected from Arumarji)
Jump to navigationJump to search

Armaaji are armadillo enemies in Densetsu no Starfy 4, or rather floating platforms like Barikku and Lurchins. Some float in the air and hide in their spiky protective armor. If Starfy or Starly touches an Armaaji when it is all curled up, they will get hurt and end up at the start of the last room. Using the Kigurumi ability Starfy or Starly can throw pork cutlets or octopus sticks at it via the Y button, to make it expand into a bridge which they can use to travel across long gaps.

Other, winged Armaaji hide in the ground and act like lifts similar to Liftwisp from the previous The Legendary Starfy games. Like Liftwisps, these Armaaji can be revealed by using the B button to pull an angry face at them when Starfy or Starly are under the Kigurumi. When they are revealed, they will continuously move up and eventually disappear. 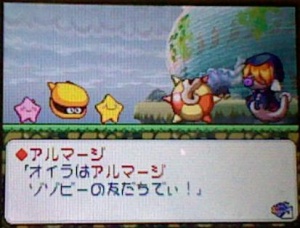 Armaaji curled up in its spiky protective armor.
Retrieved from "https://www.starfywiki.org/index.php?title=Armaaji&oldid=33799"
Categories: