Old Man Lobber (Rob-jiisan in Japan, romanized in Super Smash Bros. Brawl as Lobjii-san) is an elderly lobster who usually helps Starfy learn new moves and gives him advice along his adventures.

He lives or used to live in a cave located on a small island called Lobber's Cave. In Densetsu no Starfy 4 he lives in a villa in the Amiy Kingdom. In The Legendary Starfy, he is found in Hotcha Springs as well as the hidden ??? stage.

During his youth, he along with Starfy's father saved the world from the evil demon Ogura and sealed him inside a magic jar, thus bringing peace. Much of his life after that is unknown and he seemed to have not have had much contact with Starfy's father after the latter became the king of Pufftop and had Starfy. He also knows Old Man Vern from when he was young.

Old Man Lobber finds Starfy after he fell out of Pufftop. He takes Starfy to his home to practice his basic abilities. After Starfy leaves Old Man Lobber's house they meet again much later in the game. Old Man Lobber tells Starfy and Moe more about Ogura at this point.

After falling out of Pufftop again Starfy and Moe go to Old Man Lobber's house. Most likely to either practice basic abilities, or get some helpful advice. Old Man Lobber fights Ogura before the final battle in the game.

After falling out of Pufftop for the third time Starfy, Moe, and Starly start by visiting Old Man Lobber. Most likely for the same reason as in Densetsu no Starfy 2. A short flashback of Old Man Lobber and Papa Star's battle with Ogura can be seen in this game.

After hearing about the distress in the Amiy Kingdom from Mattel, Starfy returns to the sea along with Moe and Starly where they accidentally fall in on Old Man Lobber while he is tending to his bonsai tree, and as in previous games he aids Starfy by giving hints and advice.

In The Legendary Starfy, he is first encountered in Hotcha Springs where he will give advice to Starfy to help him along his journey. Throughout the game the player can access a special feature called Lobber's Logbook on the bottom screen which keeps record of all the player's achievements.

After beating all ten worlds of The Legendary Starfy, and beating certain time limits in each level of the last stage (???), Starfy will be able to fight Old Man Lobber as a hidden, optional boss in Stage 10-7, known as Master Lobber (Japanese: マスター • ロブ) in this particular case. He is fought underwater and challenges Starfy, as a test to see how much he has progressed in his adventure, and how much he is worthy of his title of prince of Pufftop. Master Lobber will initially attack by holding up an energy shield around him and then charging at Starfy. If he dashes into the middle of the room, he will shoot Starfy with bullets.

When Master Lobber has one or two health points remaining, he will turn gold and use his "Clakkity" move, which involves charging at Starfy and crushing him. Old Man Lobber is invincible while he is gold, though he will eventually wear himself out, stop charging at Starfy, lose his golden hue and become vulnerable again. If Old Man Lobber touches Starfy while he is gold, Starfy will instantly lose all of his health points and receive a Game Over. This attack is very difficult to avoid compared to the attacks of other bosses fought prior to the main game's completion. To dodge this move, Starfy will have to perform a Turbo Swim in the right direction, for example by performing a Turbo Swim towards the top or bottom of the area when he is initially heading left or right and making Master Lobber charge off of the screen. 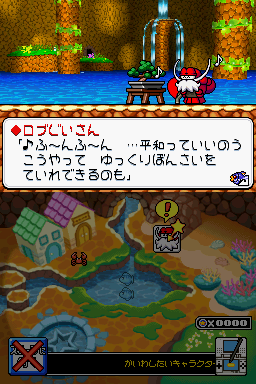 Old Man Lobber and his bonsai near the beginning of Densetsu no Starfy 4.

Old Man Lobber enjoys caring for bonsai. In Densetsu no Starfy 3, according to the bonsai accessory in the Stuff, Old Man Lobber had a very precious bonsai that appears to have been destroyed with scissors.

In Densetsu no Starfy 4 he got a new bonsai. Near the beginning of the game, Starfy, Starly and Moe land right in the middle of his bonsai tree, ruining it. To fix it, he asks Starfy to give him a Repair Kit, while he can refer to the signboards to remember his abilities along the way.

From Lobster/Rob and お祖父さん (male senior citizen or "old man").