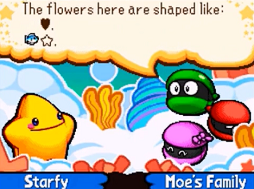 One of the questions from the quiz in Skydye Heights (Stage 6-3).

The quizzes (Japanese: クイズ) are a series of five questions asked by Moe's siblings in various areas in The Legendary Starfy. They appear after the area has been cleared at some point. Solving the quizzes does not unlock anything, however, Moe's siblings may provide information about secret(s) after the questions are answered correctly.

Answers to these quizzes are indicated in green.

Q1: What is Starfy's sister's name?

Q2: What does Bunston collect?

Q3: What does the mermaid say?

Q4: What are Herbert's pets called?

Q5: Who's the wrestling catfish?

Secrets: The parents (Kyorozou and Moe's mother; names unmentioned) of Moe's siblings weren't around when they were growing up, so Moe took care of them. Although Moe can seem grumpy at times he has a soft side to him. Moe also has a crush on someone (this is actually Ruby) but Moe's siblings do not mention this, stating that it is "obvious".

Q1: Who is the wise old lobster?

Q2: Who's the Squirts' manager?

Q4: How many Squirts are there?

Q5: What world are we in right now?

Secret: The character Bawss was created by the game developers after they went out for lunch and the special on the restaurant menu was "fresh squid".

Q1: What do the penguins make?

Q3: Who's the boss of Chillydip Cove?

Secret: There are six of the Jellato Sisters, but it is difficult to tell the difference as they look very similar. The Jellato Sisters compete with each other to try to find out who's the cutest. Moe's siblings feel that this is "almost too cute".

Q1: What grows in Sogwood Forest?

Q3: Who is chasing Starfy?

Q4: What question number is this?

Secret: Sogwood Forest used to be called the "Poison Woods", but since it is both full of poison and damp its name was changed to Sogwood Forest. Moe's siblings thinks Sogwood Forest sounds better and say they "have to think of the tourism industry".

Q1: What kind of animal is Shurikit?

Q2: Who is Shurikit's rival?

Q3: Does Bunston love mine cars?

Yes, he loves them.

No, he can't stand them.

Secret: When fighting Ronk on the mine cars, if Starfy fires "from the bottom corners", then he can do a lot of damage to Ronk's car.

Q2: Who came here to see the sights?

Q3: How did you get to Skydye Heights?

I was tossed by a mine car.

I was kicked by King Ping.

Q4: Who is Herbert's brother?

Q5: What's the name of the cloud guy?

Secret: Moe's siblings state that Moe has a crush on Ruby, they say he is "terrible at hiding it" but also state that he hasn't told Ruby how he feels about her yet. This is apparently because he is too shy even though Moe normally talks a lot. Moe's siblings think it is "funny watching them together".

In the Japanese version of The Legendary Starfy, finishing this quiz will result in an apparent glitch in which solving it will change the music to that of Sogwood Forest instead of Skydye Heights, until the player leaves the room.

The name of Mr. Clouds in Japanese is "雲おじさん" (Kumo Ojisan). This is a possible reference to the character Kumo Ojisan from Densetsu no Starfy 4.

The Stage 6-3 quiz in Japanese and English versions, showcasing the glitch and "雲おじさん" reference.

Q3: What does Papes fight with?

A shield made from cards.

A shield made from a shard.

Q5: What is the gang's special move?

Secret: In the Paper-Cut Crusher Battle, one of the Terrible Trio "will always be out of step with the others", giving away their next move.

Q3: What powered the train?

Q4: What is the train armed with?

Q5: How many doors are on the train?

Secret: When Moe's Sniffer goes off in The Cosmic Express and nothing seems to be there, it may be a good idea to look behind the walls of the train.