Starfy, Moe and Bunston must take The Cosmic Express driven by Modo and powered by Junior to get there. On the way there, in Stage 8-3 ('Asteroid Attack') they are attacked by several Swabbies in UFOs that try to throw asteroids at the train but Starfy deflects them with his Star Spin, allowing the team to get to Bunnera Castle.

The later part of Stage 8-3 is set inside Bunnera Castle, as well as the whole of Stage 8-4 ('Mashtooth's Last Stand') and Stage 8-7 (Area Secret 3). There are a lot of underwater areas in the castle and floating puddles, though not all of the castle is set underwater. 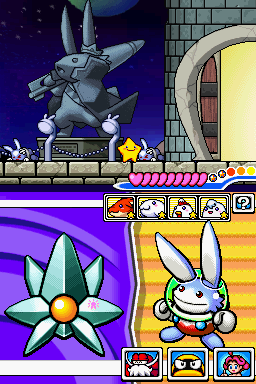 The entrance to Bunnera Castle, seen after Junior and Modo drive The Cosmic Express near there in Stage 8-3 ('Asteroid Attack')
Retrieved from "https://www.starfywiki.org/index.php?title=Bunnera_Castle&oldid=31861"
Category: