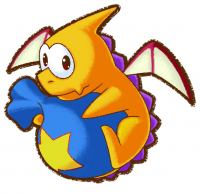 Artwork of a Pearl Dragon, one of the Rare Enemies from Densetsu no Starfy 4

Note: The lists from the Game Boy Advance games may be incomplete and/or have errors due to the Nintendo Official Guidebooks for these games not listing all (DnS3)/any (DnS1, 2) of the Rare Enemies in a separate section.

Rare Enemies (Japanese: レアな敵)[1] are certain enemies in all games in The Legendary Starfy series except for The Legendary Starfy that only appear and/or can only be added into the Picture Book or Trading Cards after beating the game once. They may be found in old Areas, or in secret Areas. They are sometimes found in groups.

In Densetsu no Starfy 3, Evil may be considered a rare enemy because he can only be battled after beating Altered Ogura and clearing the game for the first time, however, he is seen during the story.

The Legendary Starfy doesn't feature any Rare Enemies per se, however, there are some enemies exclusive to the Pufftop and ??? Stages that are only available post-game.

Below are lists of Rare Enemies and where they are found.