Here, Starfy meets Herman, who's worrying about something. He asks for Starfy's help in retrieving his pets, or Coddies, from a Goblup that swallowed them. Starfy suggests that he can hit them with his Star Spin, and goes for the Goblup to free Herman's Coddies. Use your Star Spin to attack bad guys or break barriers. Just don't get too dizzy! After releasing the Coddies, Starfy heads back to Herman, and thanks Starfy for his help. Starfy then asks about Big Squiddy and a 'floppy-eared kid', and luckily, Herman has seen the two! Herman tells Starfy about a shortcut behind him, and he probably catch up with them. Herman wishes Starfy good luck. After leaving, Starfy picks up Treasure and finds Herman's Diary inside.

Today, I saw a strange little guy get dragged away by Big Squiddy. The kid was dressed like he was from outer space. far out! I hope he's OK. I could help...But I can't leave my Coddies.

Surfacing from the water, Starfy meets Herman again, and this time he's really worried. He's lost five 'super-rare' pearls, and he doesn't find them, he can't by treats for his Coddies. Starfy asks why he can't feed the Coddies regular snacks, and Herman is shocked. Feeding his Coddies regular food is cruelty to Coddies. He asks for Starfy's help, and Starfy accepts. After finding the pearls, Herman thanks Starfy and rewards him with a secret place that he found. He marks it on Starfy's map.

Starfy meets up with Moe, and he tells him that he caught a whiff of treasure, and his nose says it's nearby, and he tells Starfy that 'if he sees any funky cracks in the walls,' he should use his Star Spin. Starfy then says that saving the 'space kid' is more important than treasure, and this introduces "Moe's Sniffer". Starfy finds treasure, and it's Beachwear. Before leaving, Starfy meets Globerto. He travels the world making the best maps. If Starfy ever loses his way, Globerto can help with his maps. 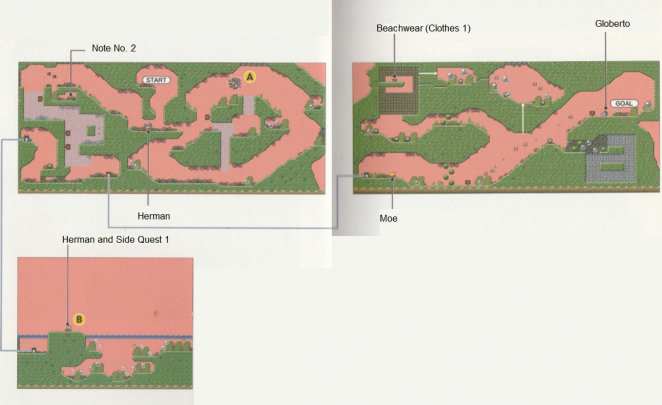