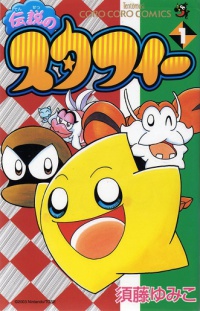 The front cover of the first volume

This series was frequently submitted to issues of CoroCoro Comic from June 2002 (before the official release of the game Densetsu no Starfy in September 2002) until October 2005, and it was illustrated by manga artist Yumiko Sudō. Prior to June 2002, another series of Densetsu no Starfy series manga ran earlier the same year, illustrated by Sayori Abe, but is not to be confused with this one.

The first two volumes of this manga series were available for purchase in the form of a booklet (tankōbon) from 28th October 2003 and 28th September 2005 respectively. (ISBN:4091431410 and 4091431429) The booklets were both 192 pages long, and were sold for ¥410. [1] [2] The manga was published by Shogakukan and was copyrighted to Nintendo and TOSE*. A manga known as Densetsu no Starfy R based on Densetsu no Starfy 4 succeeded the original series.