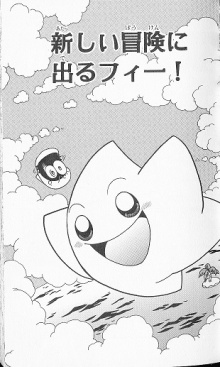 Out on a New Adventure Fii! (Japanese: 新しい冒険に 出るフィー!, Atarashii Bouken ni Deru Fī!) is the second chapter of the second volume of the Densetsu no Starfy manga illustrated by Yumiko Sudō.

The Pufftop Guards are training. Papa Star walks in to check on them. One of the guards gives a stack of paper to him that shows their schedules. Papa Star seems impressed by how much time they spend training. Just then, he hears Starfy shouting "Spin Attack" and believes he's training too. Papa Star enters Starfy's room only to see that he was sleep-talking. Papa Star wakes Starfy up and shows him the guard's schedule. Starfy doesn't take it seriously so Papa Star suggests he work as hard as they do. He tells Papa Star he cannot and Papa Star slaps him. This angers Starfy and he runs off.

Starfy eventually meets up with Moe, and Mama Star comes by shortly afterwards. Starfy tells Mama Star that Papa Star doesn't like him and Mama Star tries to reassure Starfy and says she's sure that isn't true. Mama Star tells Starfy she will go away for a little and she goes to talk to Papa Star. After Mama Star talks to Papa Star, Starfy is seen sleeping the next morning. He believes he's hearing Mama Star and Papa Star's voices in his head, but then he realizes they were actually right next to his bed. Mama Star tells Starfy that she agrees with Papa Star about him working as hard as the guards. Starfy is upset by this, calling Mama Star an "idiot" and takes off in anger.

Starfy is then seen next to the jar. He is spiteful and asks Papa Star and Mama Star if they are looking forward to Ogura coming out of the jar. Papa Star is about to slap Starfy again, but Mama Star steps in and does it before him, leaving Starfy with a bump on his face. She tells Starfy to control himself and Starfy starts to cry. Starfy attempts to attack Mama Star which causes her to fall and break the jar. Ogura is free and decides to kidnap Mama Star. He then takes off with her. Despite being mad at Mama Star, Starfy becomes upset and doesn't hesitate to leave Pufftop to save her.

Starfy brings Moe with him, thus beginning their new journey. Mama Star apparently attacks Ogura, leaving him injured with an 'X' on his right eye.