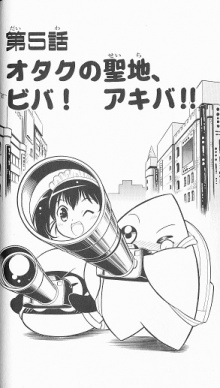 The chapter begins in Pufftop Palace where Starfy and Moe are leaving. Starly asks whether they are going to the mountains but Starfy puts on an otaku suit (almost like the one from Chapter 2 except with a shirt with a character with round cheeks on it instead of a plain shirt) and replies that he is going to Akiba but Starly doesn't like the sound of it. Starfy says he is going to an idol event and Starly appears to be scared of how Starfy and Moe are idol fans. Starfy replies that he's really rooting for idols and both Starfy and Moe walk off on the way to Akiba (named in the manga as "Akiunabara" instead of Akihabara). Starly calls them selfish.

Starfy runs off with a camera saying he is going to see idols immediately but Moe grabs on to his backpack and tells him to wait a little, thinking of all the merchandise like Nintendo DSes and catgirl dolls they could find. Starfy and Moe then look through an Akiba guide. Moe, pointing to a Wii and a TV, tells Starfy that they should check out the latest game machine. Moe picks up two Wii Remote and starts using them to hit a ball on the screen with rackets. Starfy tries to have a go but says "it's quite difficult" and begins using the Wii Remotes to knit a cloth with some thread. Moe shouts at Starfy and tells him that they aren't used for knitting.

Later, another member of Starfy's species appears and shows him something inside of a gashapon capsule. Starfy is excited so he turns a gashapon machine and receives a capsule, wondering what's inside it. Starfy receives some chikuwa and Moe receives some konnyaku. At least Starfy eats his and Starfy wonders what to do next so Moe looks in the Akiba guide book.

Moe finds a room full of figures. Starfy finds it amazing, thinking there are so many and Moe looks at some girl figures thinking they are amazing too. Starfy walks to another area of the room with more "amazing" figures and Moe is quick to follow him. Starfy finds a "figure" of a female character resembling Starly skating while leaning over backwards.

Starfy wonders what to do next so Moe looks in the Akiba guide book again and suggests that they look in a manga shop, which is called "Manga Spring" (Japanese: まんがの泉). There, they find many manga and drawings of characters like Mario (who is named "Sawarayukio" (Japanese: サワラユキオ)). Moe is surprised to find a drawing of Starfy and finds Starfy producing manga about himself. He and Moe are kicked out by an angry bookshop owner.

Starfy sits down sad while Moe looks through the Akiba guide book once more. He finds a "Maid Cafe" and Moe is excited to see maids but is a little nervous. Starfy runs off and wears a maid suit, shocking Moe. Starfy and Moe look around the corner and find the "Shakotan Event" (Japanese: シャコたん イベント); the idol event that Starfy and Moe were excited about. Starfy and Moe sit down and get their cameras out. The idol is about to be revealed and Starfy thinks it's the perfect chance to get a photo. He zooms his camera in and the idol is revealed to be no other than Starly, disappointing Starfy and Moe.