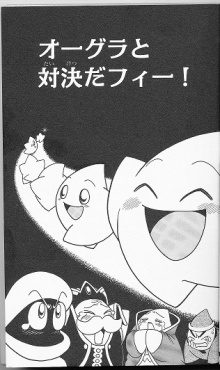 Ogura and the Showdown Fii! (Japanese: オーグラと対決だフィー!, Ōgura to Taiketsuda Fī!) is the first chapter of the second volume of the Densetsu no Starfy manga illustrated by Yumiko Sudō.

A welcome home party awaits Starfy, but the celebration ends before he even gets there when Ogura attacks. After attacking all the other Pufftop residents, he grabs Starfy and nearly squeezes him to death. Meanwhile, Moe is cooking dinner and comments that the food is cold. He tries to heat it up, but something goes wrong which somehow results in an explosion. The explosion interrupts Starfy and Ogura's battle and makes the jar fall and attempt to suck something up. Realizing this, Starfy attempts to pull Ogura within the jar's range. He successfully gets Ogura into the jar, but it starts to suck up Starfy as well. Starfy sees it as a sacrifice and says goodbye, but Moe jumps in and attempts to save him. This results in Moe being sucked up by the jar as well. The Pufftop residents worry that they're gone, but then they see the bottom of Moe's shell stuck on the jar's edge. The residents then attempt to pull him out. They manage to save Moe and Starfy.

Starfy then closes up the jar, leaving Ogura sealed once more.