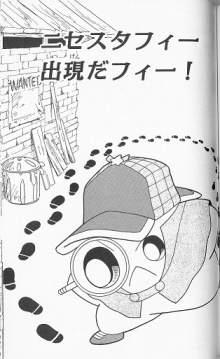 False Starfy Appearance Fii! (Japanese: ニセスタフィー 出現だフィー!, Nise Sutafī Shutsugenda Fī) is the eighth and final chapter of volume 1 of the Densetsu no Starfy manga by Yumiko Sudō. Although it is the final chapter in the volume, it is followed by a series of four-cell manga called the Starfy Four Cell Theater.

The chapter begins at a stall with Chuta selling okonomiyaki pancakes to many people in a town called Okonomiyaki Town. Doppel and Chorosuke suddenly appear, and Doppel tells Chuta to give them to him. Doppel tips up the pancake stall and says that he and Chorosuke are the 'honorable Starfy and Moe'. Doppel steals Chuta's earnings and walks off with them while Chuta takes the pancakes. Chuta starts crying, saying Starfy and Moe are bad.

Meanwhile, the real Starfy and Moe are swimming to the town. When they arrive, Moe says that they make good pancakes in the town and Starfy wonders what pancakes are. Starfy and Moe find some a jar full of pancake syrup. Starfy begins to tamper with it but Moe tells him to stop. Starfy isn't convinced by Moe how good he thinks pancakes are but Starfy is soon to like them after he finds the smell of one to be good.

Starfy and Moe go to Chuta's stall and asks for pancakes for two people but Chuta gets angry, thinking they are Doppel and Chorosuke. Moe thinks he meant that only takoyaki pancakes are available, as Chuta keeps saying 'tako' but he was in fact frustrated. Chuta calls for the police and the Taruika come with poles and hit them on the head, giving them bumps.

Starfy and Moe hide in a hole in a wall where the Taruika cannot find them. Starfy starts crying saying he wanted to eat some pancakes. Starfy and Moe then find a 'wanted' poster with Chorosuke and Doppel on it that says 'Moe' and 'Starfy'. Moe starts drawing on it with a pen to alter the images to become more unrecognizable. Moe notices that the clam on the picture is Chorosuke who happens to be a relative of his.

Starfy and Moe step out of the hole and spot Chorosuke walking off carrying some pancakes on his head. Starfy wears some glasses and a hat and decides to go and confront Doppel and Chorosuke. He attacks them with his Star Spin and takes the pancakes. The Taruika come and Moe tries to tell them that the thieves are behind him but they go and beat up Moe as well as Doppel, Chorosuke and Starfy. Doppel and Chorosuke run away and manage to escape.

Later, Starfy starts crying because the pancakes are ruined. He touches what he thinks is Moe's back, but the clam turns around and turns out to be Chorosuke. It is revealed that Moe was taken to Doppel's hideout, where he was tied up by Doppel. At Doppel's hideout, Doppel shows Moe to Ogura, who hypnotizes Moe.

Meanwhile, in the town, Starfy and Chorosuke are having a conversation. Chorosuke comments that he was longing to be a detective like the role Starfy is currently assuming. Starfy comments that in order to get Doppel arrested, they must have a stakeout and must also listen for information from a wide variety of other people. Starfy tries to think of a third thing to do but says he'll leave it for 'another time', otherwise he 'won't remember everything at once'. When Starfy talks about Moe, Chorosuke comments that he might be his cousin.

Chorosuke wears a disguise like Starfy and both Starfy and Chorosuke have a stakeout. Starfy is worried that they must catch Doppel fast for the sake of Moe. Starfy smells some pancakes from Chuta's stall. Starfy comes running, probably for the pancakes, but then he finds Doppel running away. Starfy goes to attack Doppel but then he finds Moe standing on top of him, who comments that he's 'caught him at last'. The Taruika come and Moe feels bad (possibly for Doppel) and asks if they can reduce the crime somehow.

Starfy finds it weird how Moe is acting and Chorosuke tells Starfy that Moe went under hypnosis and that the hypnosis reverses his personality. At the end of the chapter, Starfy, Moe and Chorosuke help Chuta make pancakes.