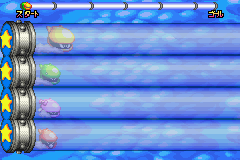 A game of Irachiki Dash!!

Irachiki Dash!! (Japanese: イラチキダッシュ！！) is a minigame in Densetsu no Starfy 3. It becomes available in Moe's House after clearing Crushed Ice Alpine (Stage 4). The objective of the game is to dash to the end of a long tube and to clear the metal cork at the end of the course.